Bathrooms Through The Years

In the last century, interior styles have changed with every passing decade.

Throughout the years we have all made some very questionable decor decisions.

Remember when the word avocado didn’t just refer to the fruit you have with your poached eggs on toast, but the colour of your full bathroom suite?

Let’s not forget about the pink vanity units and retro patterned tiles of the mid-sixties. Fortunately, those particular trends have come and gone, but there is still design inspiration we can glean from years past.

Take a look through the decades, spark some nostalgia and despair at some rather ugly bathrooms! 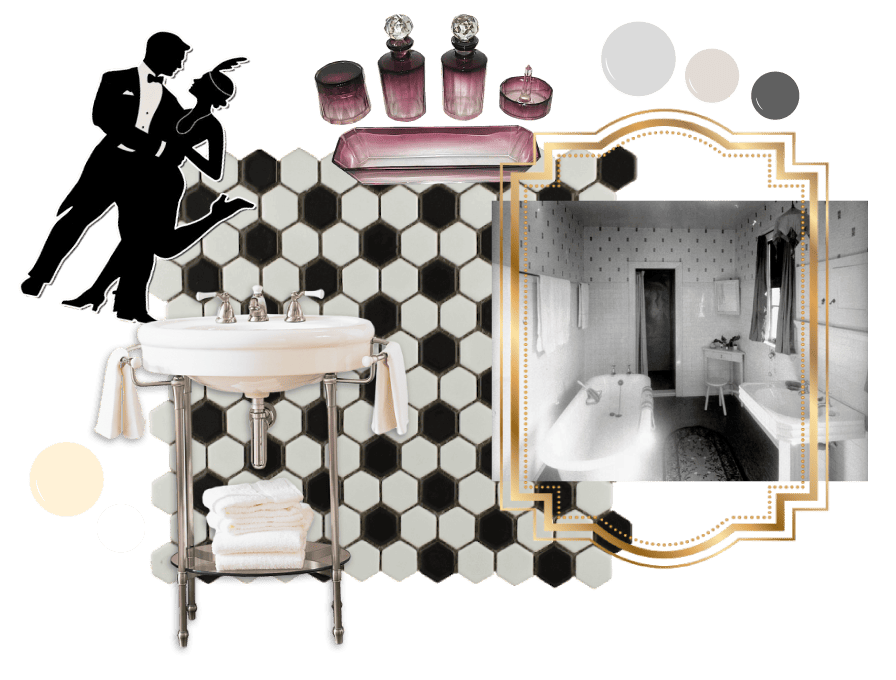 The roaring twenties had some not-so-fierce interior style. The Great War had not long since ended, women in the UK won the right to vote and the Walt Disney Company formed – a decade full of highs and lows, we’re sure you’ll agree.

Bathrooms, though, looked like a scene from The Shining.

An eerie, demonic ghost could jump out at any second, kind of look, with a utilitarian décor approach. Back then, it was more about practicality than looking nice – as you can see from the picture.

Plumbing was left exposed, showers didn’t exist in many homes, but freestanding baths and, strangely, lamps where the ‘in’ things.

The societal shifts that shook up the 20’s had a knock-on effect into 1930’s interior (and not always for the better). Jazz music hit its peak in popularity and thus, welcomed the ‘art décor’ interiors.

This new interior concept introduced pops of colour into once mundane bathrooms – however, we don’t know if we can forgive the sticky-floored pub toilet tile vibes.

It was goodbye plain white walls and hello to blue, teals and pastel tiles (which, honestly, we don’t mind so much).

The 30’s also gave us seafoam tiles, the idea of putting your mirror above the basin (who’d have thought it?!) and chunkier storage solutions – thank you 1930’s! 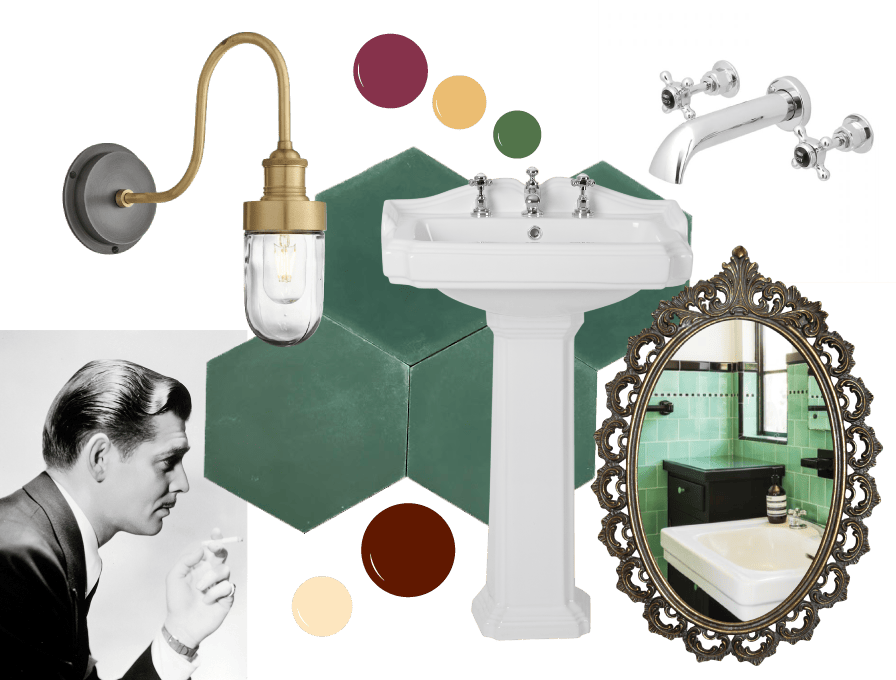 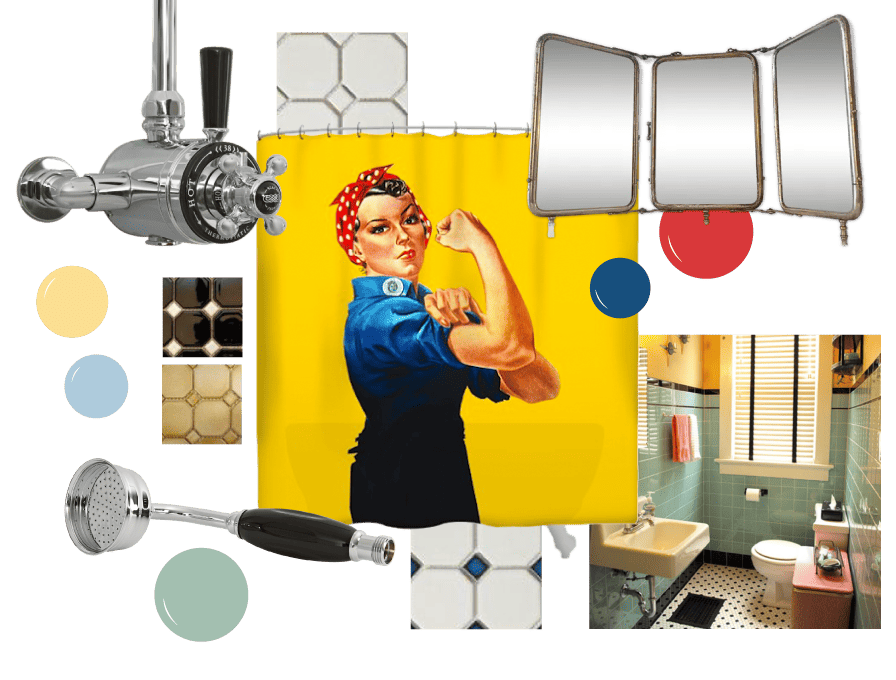 Bombs destroyed a swathe of UK homes during World War II and recovering and rebuilding dramatically affected 1940’s interior design and the size of forties homes.

Richer colour schemes such as reds, blues and yellows were introduced, and people began to add their own flair with accessories and wall art.

Despite some questionable colour decisions, the bathroom began to be considered more of a family-friendly room.

Ah, the 50’s. A decade that saw the birth of British Rock & Roll and an era that focused on ‘out with the old and in with the new’.

The post-war boom brought massive changes to how people decorated their bathrooms.

Symmetrical décor was a 50’s favourite; wall lights were placed on either side of the mirror, along with toothbrush and soap holders.

Unfortunately, the questionable décor didn’t stop there; hot pinks and retro patterns were on the up as the world was introduced to legendary rock-n-roll star Elvis Presley! 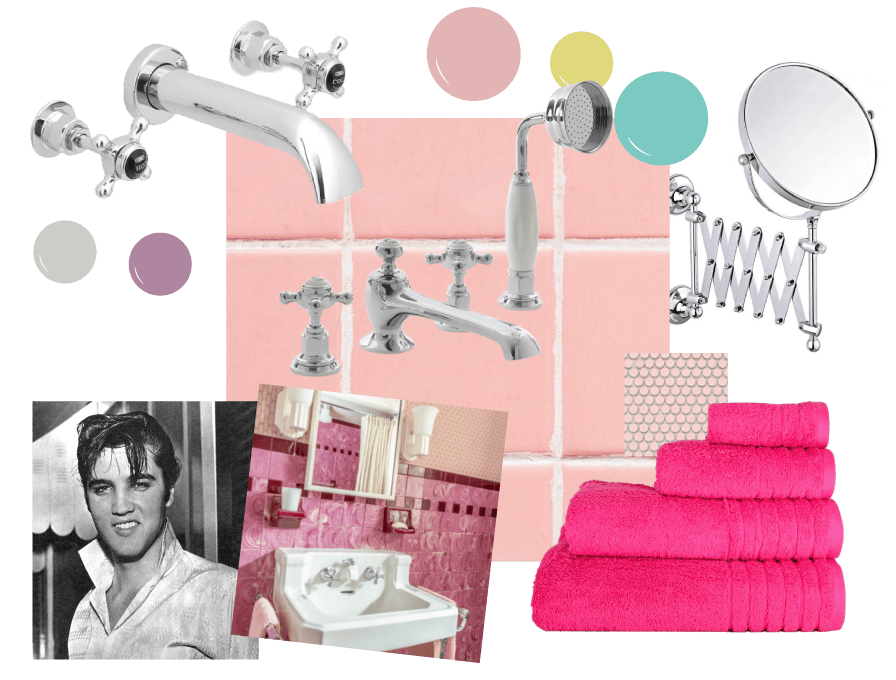 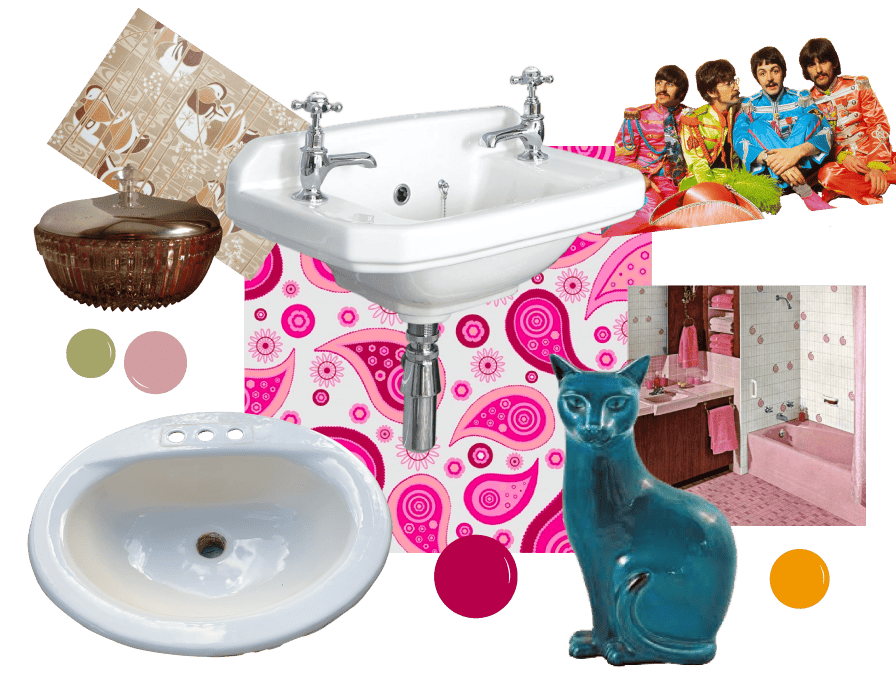 The swinging 60’s brought with it “flower power” and Hippy décor. People were experiencing their first festivals and rebellious behaviour and clothing became mainstream.

The decade saw The Rolling Stones and The Beatles conquer America and the beginning of truly unforgiving ugly bathroom décors.

Echoing this new mainstream culture, built in furniture, shower baths and other never before seen bathroom trends became all the rage and retro patterned tiles and coloured ceramics had come to take over UK homes.

Brace yourself for this one, because the 70’s was the time when green, yes, you read that right, green bathrooms were high in demand. Avocado was no longer just a fruit – and we doubt anyone could tell you what one looked like back then – but a reference to the colour of your entire bathroom suite.

Amongst other terrible décor, the ultimate 70’s bathroom crime was carpet in the bathroom! Urgghhh!!! 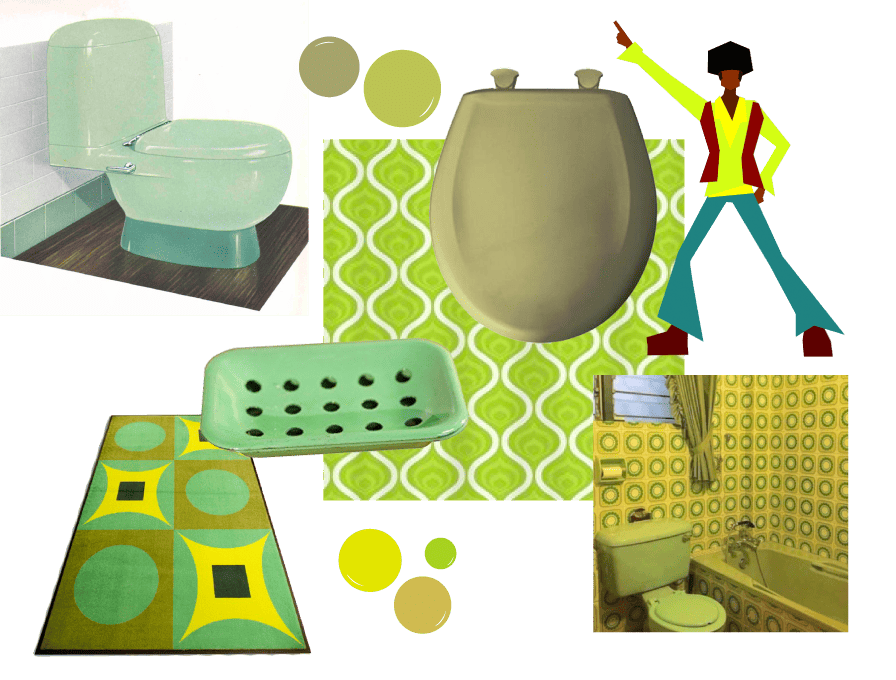 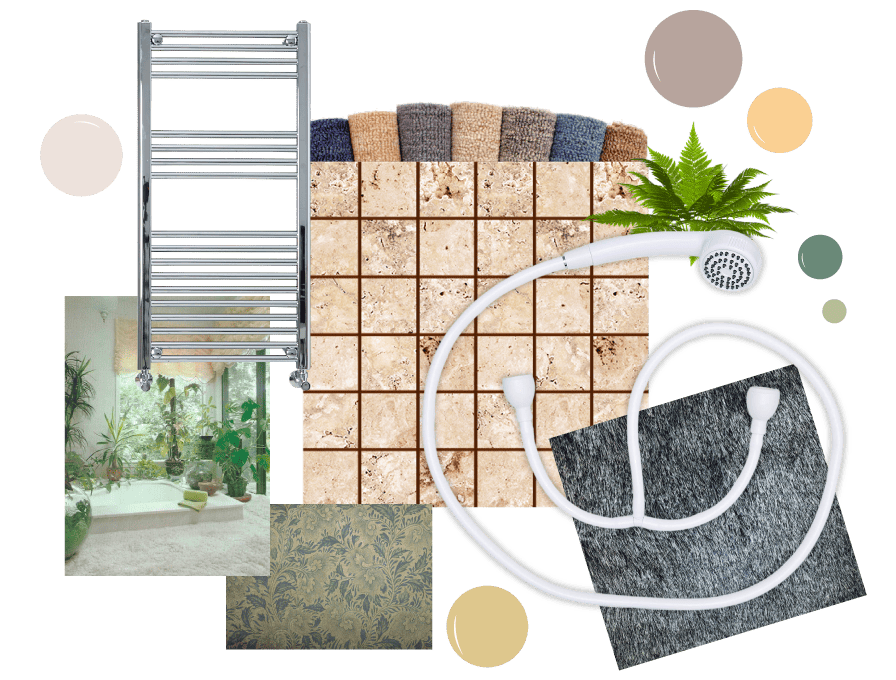 Chintz, wall to wall thick carpets and blue ceramics, all things that should be left behind can be found in the 1980’s bathroom.

Although there were many world changing events in this decade – including the invention of the internet and the first episode of the Simpsons – nothing particularly life changing happened in the world of bathroom interiors.

Fern plants were the chosen accessory and boy, did they over-use them.

Ferns hanging off the shelves, ferns hanging from Macramé baskets, ferns on the vanity units – there may have even been ferns on ferns. No space was spared from the dreaded fern plants.

The 1990’s, the decade of the millennials. Thank you 90’s because you gave us Hotmail, Harry Potter and the Philosopher’s stone,  F.R.I.E.N.D.S. and you also rocked bathroom décor more than any decade so far.

From corner baths to Hollywood vanity lighting, there were so many dubious decorating ideas that had their heyday in the 90’s. Although, back in the day, we thought they looked pretty chic, we think it’s best many of the 1990’s décor and bathroom designs don’t make a comeback anytime soon. 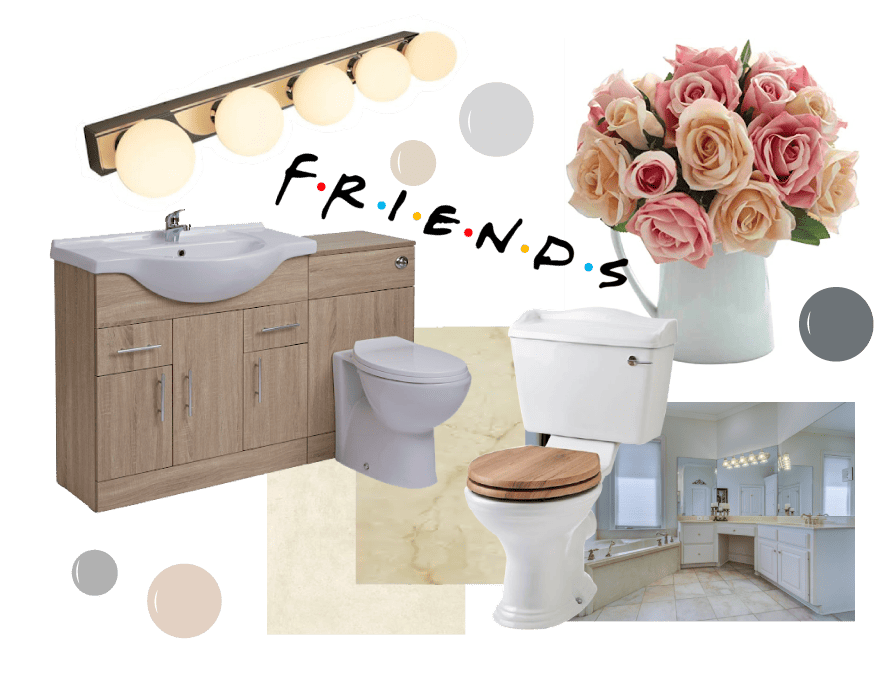 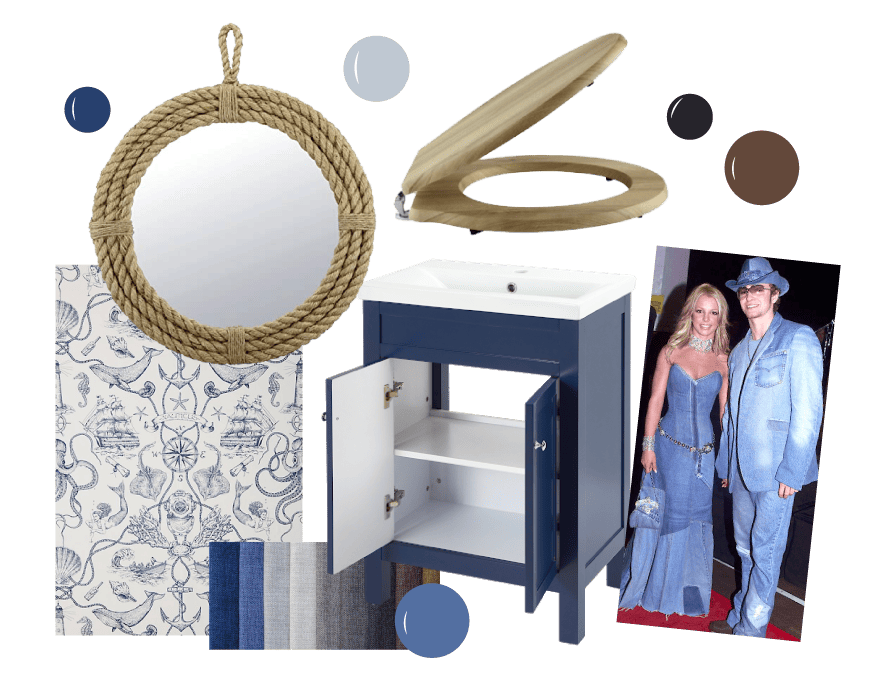 The 2000’s, the decade that gave us the best version of Britney, the Nokia 3310 and the holy grail that makes us all seem smarter than we are, Wikipedia.

The decade also saw the birth of Big Bathroom Shop, however, despite this we aren’t too mad about noughties interior trends, because the early years were pretty ridiculous.

Picture this, it’s a brand-new millennium and your bathroom is filled with sailor boats, anchors and anything else remotely referencing the sea.

Nautical themed bathrooms were infamous and don’t get us wrong, a few shells or navy here and there is great, but decorating the whole room in some strange dedication to the sea is a tad too far for us.

Thanks to the last decade we saw two royal weddings, fell in love with Game of Thrones and started taking pictures of our food for the ‘gram’.

What can we say about 2010 + interiors, other than we loved them? Minimalism was extremely popular along with spa-inspired bathrooms.

Seamless storage was a big hit, wet rooms were loved by all and free-standing tubs made a comeback – and, of course Big Bathroom Shop started supplying even more of the very latest in luxury bathroom designs! 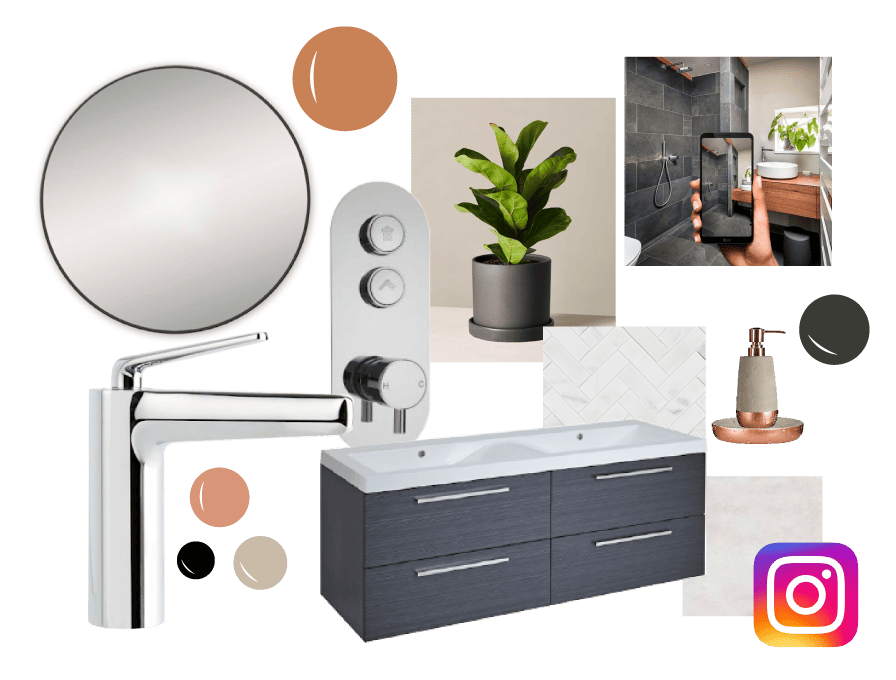 We’re thinking big for 2020 bathrooms. Perhaps we will have a shower that can read minds, or an ask Siri toilet?

In all seriousness, as we step into the next decade, we are seeing more UK homes adapt the best interior elements from previous decades and working them into contemporary bathroom styles.

Patterned tiles were all the rage way back in the 1930’s and have recently made a return into our bathrooms, and we have to say, we’re quite happy about that. 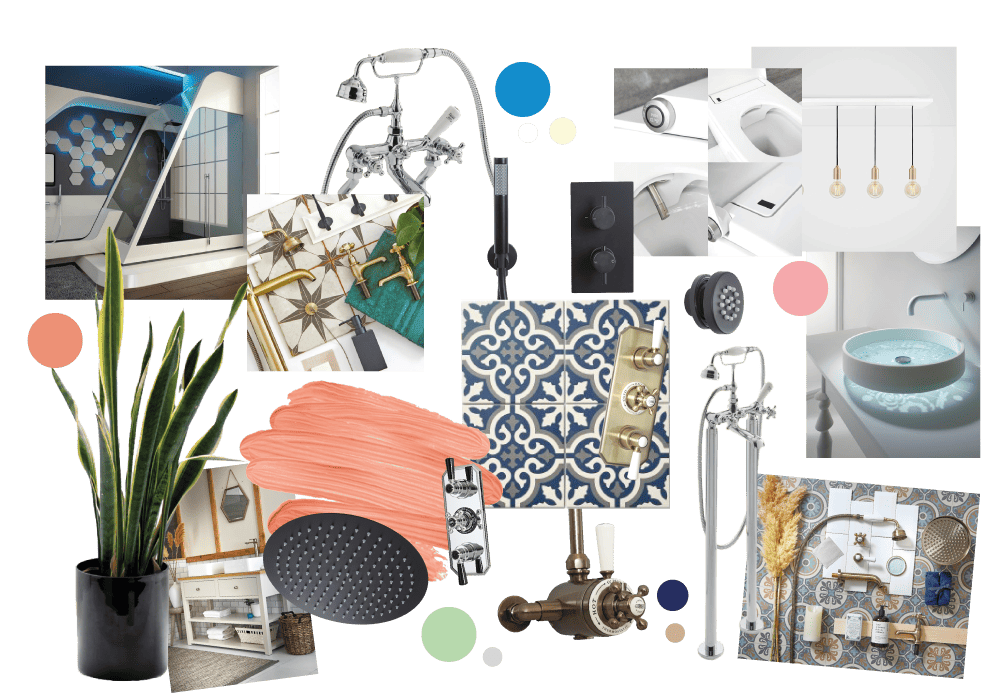 The 80’s had ferns and the 2020’s have every botanical you can think of. The new need to bring a touch of nature to your bathroom décor, comes from a focus of wellness interior concepts. Plants can breathe life into any space and are great for reducing stress – Just what we need!

In terms of futuristic bathroom furniture, there will soon be a demand for homes that keep us connected. In a recent survey from BuildingProducts 83% of UK homeowners expressed their desire to have a toilet with a self-cleaning feature. Get these people signed up for a Japanese bidet (we have a gorgeous selection).

Japanese bidets, or smart toilets, are equipped with washing, drying, massaging and deodorizing functions (sounds fabulous, doesn’t it?). We should expect to see more of this revolutionary bathroom technology in the next decade, keeping us connected and invention innovative products that help us manage the everyday home chores. After all, who wouldn’t want a toilet that cleans itself?!

So like clothing, our interior trends are recycled and re-imagined just as much as on the catwalk. However, it’s safe to say, there are some trends we’re happy to leave behind – avocado bathroom suite, we’re talking to you! 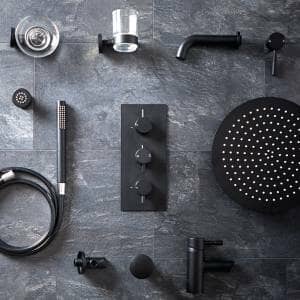 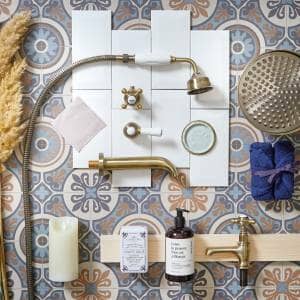 Make sure you share the nostalgia with a friend and share this article. For more Bathroom inspiration or guidance why not take a wander around our blog?

Which Basin Should I Choose For My Traditional Bathroom?

How To Clean Black Bathroom Taps
Scroll to top
Our website uses cookies to give you the best experience of our site. By using this site, you agree to the use of cookies. Read our policy.