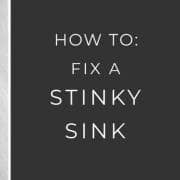 A stinky bathroom sink presents a more common issue than you might imagine. Residue, bacteria and odour tend to congregate in the drain.

Thankfully, it is relatively simple to keep your drain clean and free from odour. All you really need is some cheap household ingredients, inclusive of baking soda and vinegar.

There’s little point investing in expensive chemical-based cleaning products in your effort to clean smelly drains. Frequently, these won’t prove anywhere near as effective, and will incorporate potentially damaging chemicals in turn.

Kitchen sinks can be especially susceptible to drain smells, given that rotting food and other debris can congregate there.

There’s a few simple steps to follow to tackle your sink smell for both kitchen and bathroom sinks, though…

This might sound like the most obvious piece of advice anybody has ever put forward, ever. Soak a sink – a vessel often filled with water – in water?

That’s the general idea, but it’s a touch more technical.

First, place a sink stopper in the sink drain, filling the sink halfway with warm water and a teaspoon of dish soap. Then, wearing gloves, swirl around the basin contents until the soap dissolves in the water.

After that, allow the solution to sit in the sink for 10 minutes. This will assist in loosening any residue that has built up. Then remove the sink stopper to send the water down the drain alongside debris, helping to alleviate the bad smell now associated with your sink.

Getting the best out of garbage disposal

If your sink features a garbage disposal, it will also incorporate a sink flange. Often, for sinks of this type, the sink flange can prove the source of bad smells.

To clean the part, unplug the garbage disposal at the wall outlet or switch off the power from the breaker box. Then, attach a liquid dish to a brush with a handle or dish wand, before wetting it and putting it down the sink. Scrub the sink flange at the top, and run cold water over it for half a minute.

Create your own sink deodorizer

You could potentially save yourself plenty of future hassle by creating your own sink deodorizer, and it’s likely you’ll already have all the necessary ingredients to make an effective solution.

All you require is…

Now, to make your own deodorizer…

Take particular care when pouring the hot water not to place your face over the drain to check that it’s working. The steam could potentially rise and pose a burning hazard.

There’s a variety of DIY deodorizer recipes available, typically including the ingredients aforementioned. That solution is an ideal option to begin with in your bid to fix a smelly sink.

Stop yourself from having to clean a smelly sink

There might be an effective means to clean a stinky sink, but that doesn’t make it an enviable task.

You can stop yourself from having to knuckle down by taking measures towards preventing smelly drains. And after all, it is easier to stop a drain problem from arising in the first place than it is to eliminate it.

To cease odours from infiltrating your sink drains, use a wire mesh to catch any food materials and stop them from washing down the pipes. You can run boiling hot water down the sink each day to ensure everything is working as it should be.

Don’t put oil or fat down the sink, as this can lead to a noticeable build-up in the pipework beneath the kitchen sink drain.

For bathroom sinks – wall hung basins and counter-top sinks alike, soap and hair are common causes of blockages. You can combat them with a sink strainer, which will help prevent them from being washed into the pipework.

The key to a clean sink

So there you have it. The easiest means to avoid a smelly sink is to take preventative measures against a build-up of residue and gunk in the first place.

If you do struggle to maintain a sparkling sink at any point, it should be relatively easy to combat the smell by following the advice listed in this article.

However, if you have concerns that there is a larger problem causing the smell, it might be worth consulting a professional plumber for advice. 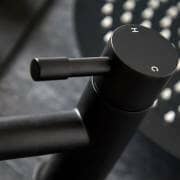 Take one look at some of the most popular home interior accounts on Instagram and you will no doubt have seen black bathroom taps and brassware.

Over the last year or two, black taps have seen a rapid rise to the top of trendy bathroom ‘must haves’ – people simply cannot get enough of their striking matt black goodness!

But what good is having a trend-setting bathroom – loved by thousands of followers on social media – if you can’t keep your new stunning matt black taps and fittings clean?

You could of course carry on as usual, but unlike ‘regular’ bath and basin taps with metallic finishes, matt black needs a more delicate and thoughtful approach to cleaning.

One false move with a heavy chemical cleaning product could see the demise of that perfect matt black finish – and with it, the end of your beautiful bathroom space!

So, to save you from disaster, read on to learn how to clean black bathroom taps and keep that stylish dark noir look you’ve been dreaming of!

Why Is Cleaning Black Taps Different?

As you have probably already worked out from looking at them, matt black taps have a different finish to standard bathroom tap designs – and we don’t just mean the colour!

Unlike their chrome counterparts, matt black taps are designed to give that ‘total’ black look and rather than reflecting light they absorb it, giving the matt black finish.

The processes used to give your black taps this sleek matt finish makes them a little more sensitive than basic brassware, so simply picking the first cleaner you see is not always the best option.

There are a variety of techniques used to create that stunning matt black finish, with most manufacturers implementing either an electroplating process or something called PVD.

Other ranges feature painted coatings that are just as durable, and some techniques can be combined to produce that dark sophisticated finish.

Electroplating is a pretty scientific way of getting the black onto the surface of your taps and brassware.

The process involves a water-based paint solution being manipulated at the atomic level, with a current of electricity turning it into a super thin film of black coating.

This gives a durable finish that will stand up to everyday wear and tear, but you still have to be careful when cleaning.

PVD is a little like using one of those vacuum forming machines they used to have at school, as it involves using a vacuum to add a layer of thin film across the surface of the metal.

This vacuuming technique is said to be more effective than electroplating and will create a more resilient matt black finish, so it is becoming more popular.

Although both finishes add to the quality of your new black taps, any black finish can still suffer at the hands of harsh disinfectants and chemical cleaners.

That’s why it is really important that you take the time to learn how to care for your black taps – however they are finished – to prolong their use and keep that style just how you want it.

How Do You Clean Matt Black Taps?

After all that, you may be worried about doing damage if you get black tap cleaning  wrong, but honestly cleaning black taps and brassware is pretty simple, it just takes a little care and a little extra thinking.

Before you begin, there are a couple of things to remember.

Do not use the following when cleaning black bathroom taps.

Remember, these dark taps are your pride and joy!

They are delicate and stylish – they’re not a stainless steel saucepan!

To get your black taps clean, just use warm water and a soft micro-fibre cloth.

Nothing more, nothing less.

Clean from top to bottom of the tap with minimal scrubbing, gently and without too much elbow grease.

And there you have it, clean black taps.

Can Black Taps Be Scratched?

The short answer is, yes, they can.

Much like your car in the driveway though, you aren’t supposed to run sharp objects down the side and across the top of your new designer taps to see if it scratches!

Of course, you wouldn’t do that, but rings can be problematic with matt black taps and something we’re all guilty of forgetting about from time to time.

If you don’t want to remove your rings entirely when using your black taps, just be a little more aware of them and try to avoid scratching the surface of the tap.

What Are O-Ring Stains?

Once you’ve had your new black tap in place for some time, it can be natural to discover they have become a little stained by the grease applied to the O-ring.

This grease sits between the bottom of the tap and the top of your basin or bathtub.

You can try to remove this with a little warm soapy water and nothing else, but if you struggle and find that it won’t come away it can be safe to use an alcohol cleaner to remove the grease from the base of the tap.

But be extremely careful.
If you are unsure or worried that a cleaner may be too strong for your taps, you can either contact the manufacturers directly, or drop us a line.

Most of the damage done to brassware and taps usually occurs during the building and renovation phase – basically when you come to putting it in.

Be sure to check your new black taps as soon as they come out of the box – it should be flawless, with no imperfections in the finish.

Ensure you or the tradesperson you’ve employed to install the tap takes special care when handling and installing, after all, these are expensive bathware features and you want to keep them pristine!

Does Hard Water Make A Difference To Black Taps?

It can, because hard water produces more limescale.

Limescale is a chalky white colour and will no doubt stand out on any black brassware, so to keep that finish for longer you have to keep on top of it.

Just regularly cleaning can keep limescale away, so don’t get lazy!

Be Extra Careful With Makeup

If you apply makeup in the bathroom, it’s pretty much guaranteed that some of it will end up on your black taps.

These dusty particles can cause black taps to look a little cloudy when wiped away, so it’s a good idea to keep a micro-fibre cloth nearby to eliminate any offending powder.

What About Cleaning Other Black Brassware?

Obviously if you have black taps in your bathroom or en-suite, chances are you’ll have a black shower, black shower head and perhaps other black accessories.

Do you need to use the same techniques to clean these too?

Well, yes, if you want them to keep their good looks.

Whether it’s a wall-hung tap, freestanding bath tap or hand-held shower, treat each of these components with the same care as your taps and your luxury black bathroom will last longer.

How Will You Use Black?

Black taps and brassware may need a little more attention than other finishes, but we don’t want that to put you off.

As long as you keep cleaning simple it shouldn’t be a chore and you’ll find your matt black taps look stunning for years.

So, if you’re on the lookout for the perfect black tap to turn your bathroom into that ultimate insta styled space you dreamed about, check out the products in the black collection.